Gauge charts have long been a favorite of executives for comparing actuals to forecast but they often fail to accurately depict the message. Enter the bullet chart. This chart type is endorsed by visualization expert Stephen Few and uses a linear structure rather than a circular structure. In the image below, it is much easier to see how far the actual revenue is from the forecast revenue in the bullet chart. In addition, the gauge chart includes colors that would be hard for a colorblind person to see.

Bullet graphs can be arranged in a matrix formation to compare results along a series. In the example below, there is a separate bullet chart for each year of data and they are compared on the same numeric scale. It is simple to see that revenue has been declining over the four years but each year the actual revenue gets closer to the target revenue. 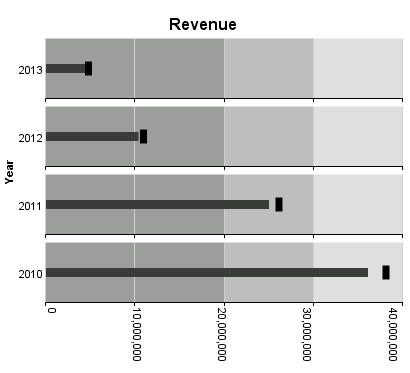 Overall, bullet charts display a large amount of data in a small space. The linear design makes them easier to understand than gauge charts and they can be customized to accurately reflect any set of data. This chart is a valuable addition to any report or dashboard.

Have more questions? We can help: