How to set up Turbo Integrator Chores to run Advanced Scheduling

How to set up Turbo Integrator Chores to run Advanced Scheduling

There is often a need in IBM Planning Analytics/TM1 system to set chores that run-in ways that the basic functionality of chores is not especially well designed to handle.

The classic PA/TM1 scheduling, which suffices for most desires is seen here in the Planning Analytics Workspace (PAW) view:

One can pick a start Day, a time and, it defaults to a frequency of “daily”, it’ll re-execute every day once enabled. 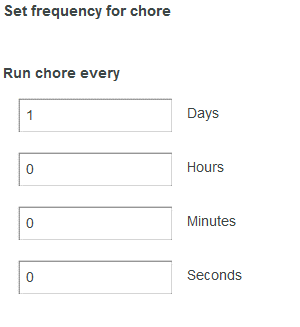 You can also set up multiple chores to execute the same underlying processes at different times to achieve “run every 2 hours only during business hours”.

Tips and Tricks: In addition, the Architect interface currently allows the choice of running /scheduling in UTC or Local time, AND the ability to schedule run times to nearest minute and second e.g. below at 7:38:54.    The reason you might care about such precision scheduling is to avoid contention or confusion that might occur in some external or internal contexts if the chore and outside events are all scheduled to run at exactly the same time.   UTC scheduling is helpful when system operations need to be coordinated across many time zones.  This functionality will probably be explicitly migrated to the PAW (workspace) interface in the future. 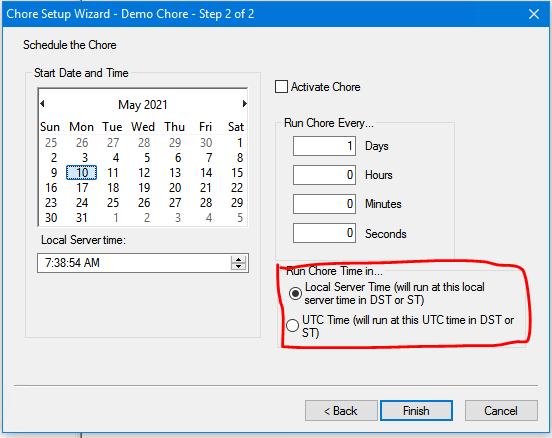 There are reasons to run chores on a more complex basis, examples:

In addition, and closely related, as chores run it is obviously helpful to pass their constituent processes different parameters that may change, or desired to be changed, by users. Native Chores can only pass “hardcoded in the chore” parameters.

The bad news is that PA/TM1 does not have this as native functionality, but the good news is that programming this is possible using a combination of existing “internal to” TM1/PA techniques.

How to Organize Chores & Processes

While there is only one way in TM1/PA to schedule the running of turbo integrator processes internally, namely chores (There are ways to “reach into” TM1 from outside scheduling applications & using the API, but that is outside the scope of this article.), but there are two ways to run a series of processes in a specific order.

A Chore can “commit all changes at the end of the chore” or “commit at end of each process” as an option.   In the former case, changes to data or metadata made by an earlier process may not be available to later processes, as the changes are held until the very end.  It follows that multiple commits means each process executes and commits one after another so that all subsequent processes have prior changes available.  Generally, multiple commits are advised.

This is different for a process that executes other processes:

Each process commits its changes upon exit of the epilog section, but if a calling process executes multiple child processes, then the sibling processes do not see each other’s changes, and no commit occurs, until the “mother process” terminates.

Consequently, if subsequent process logic depends on changes that might be happen in a previous section of the chore, results can be unexpected.  It is important to carefully consider what information is used in logic and ensure the “commit” events occur.

The CUBESAVEDATA command, which forces a “commit to disk” event for specific cube, can potentially be used to avoid this if the locking implications and time it takes are understood.

Advanced scheduling requires process code that evaluates logic.  So, one sets up a chore and one or more of its constituent processes evaluate logic.  A common way to help with this to set up a chore “control cube” that contains the necessary control data and exposes it.

The heart of the control logic to achieve logic that is flexible, easily controllable, and maintainable is to externalize the control parameters from processes. While a chore can be used to save /enter “hard coded” parameters to use at run-time, this requires editing of the chore to change, which is somewhat error prone and difficult to see, and the same is true with hard coded process logic.

A much better practice is to set up a control cube with the following dimensions:

A control cube example is below:

In this example, a chore referred to by the name “NightlyChore” in this cube, has a comment to help the admin know which real chore might be referred to and other information.  Since many chores run for months with minimal attention, having such memory aids can be a help to administrators or power users charged with upkeep.

Another sort of comment might be the exact process name in the chore that the index is referenced.   Again, this is mostly a convenience to users so they can rapidly identify what chore index drives which process.

This example also has generic parameter names, so a set a processes can be controlled from such a cube.  This can imply designing processes with parameters option like  “CELLGET parameter = yes” as an option, so the process knows to look to the control cube and ignore hardcoded parameters.

Almost any client’s desire for advanced scheduling can be accommodated in PA/TM1 with correct implementation and design. However, complex schema’s should be carefully thought through and tested.

Hrolfr (Rolf) has been working in, programming and designing TM1/PA systems for nearly 20 years and is a senior consultant and architect in the eCapital Analytics Practice. Making systems meet client's needs, using experience to avoid poor design choices, and make bespoke systems that are robust and maintainable are his professional goals. His education in both Engineering Msc. and Management Science MSc, and long contact with Accounting combined with experience, gives him a rounded perspective on many problems.