Where did my members go?

Recently, we encountered an odd error in a Hyperion Life Cycle Manager 11.1.2.1 environment, where the primary instance of a member was incorrectly deleted upon importing an Account dimension into both ASO and Planning EPMA applications.  An alternate hierarchy requiring some changes had some shared members removed, and the dimension was then migrated between a development and production environment. Upon initial import, the primary instance was deleted, even though it still existed in the import package and the target environment. This is, of course, dangerous due to the nature of the data loss that occurs when a primary instance of a member is deleted and the application subsequently deployed.

Compare to the rescue!

A simple compare is what can prevent data loss from occurring when this glitch has taken place.    After you have run the LCM dimension import to your target environment, but before you deploy the application, go to Application Library  -> Right-Click on your Application -> Compare -> Compare To Deployed Application 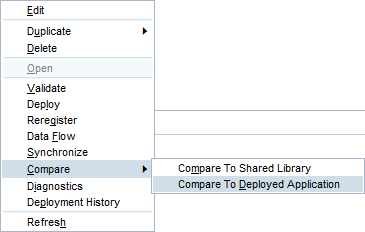 Questions?  Comments?   Feel free to reach us at: