Introduction to the Planning Simplified Interface

Introduction to the Planning Simplified Interface

The simplified interface is the new front end for all Planning activities.  This interface is the future for all Hyperion Planning applications and will be the basis of all Hyperion cloud applications.  Oracle has even stated that most new features will only be available through the simplified interface and will not be retro fitted to the standard interface.  This is already evident when you look at some of their newest features including hotkeys, form performance enhancements, and valid combinations.  In this post, we will take an introductory look at the interface and explain what everything does.

When you log in through the simplified interface, you will notice the home screen looks vastly different.  It has the look and feel of a mobile website as opposed to the usual workspace.  That is because the simplified interface is written in HTML 5, which makes it compatible with almost any device or browser.  That means this interface can now work on most tablets or phones (assuming you can VPN to your network).

After logging in, you will have the option to choose your application (note, cloud versions slightly different launch screens).  After you choose an application, you will see a group of icons in the middle of the screen, similar to the screenshot below.  These are all the common planning items from before, plus a few new ones. 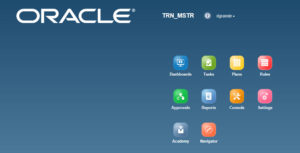 Many planning sections are similar to the standard interface (old interface version).  These items mostly function the same, but may have a different look and feel.  For instance, Plans (formerly forms) and Tasks (task lists) both work the same way they used to, but were re-written in HTML 5 and the only real difference is how the look, in the initial version at least.  Oracle has also taken this opportunity to highlight the most used objects in the application. Rules and settings, for example, were dug out of the toolbars and placed prominently on the main screen.  Reports have also been moved from the explore button on top to an icon.  If you have worked in previous versions, you will likely recognize all of these features and be able to use them right away, as most of these changes were just cosmetic.

There are also icons on the main screen that you probably will not recognize from older versions.  Dashboards is an entirely new feature only available in the simplified interface (we will explore that further in future blog posts).  Console is similar to the import and export functionality available in the standard interface, but this interface now includes a basic scheduler as well.  This, as well as a planning data repository, are integral pieces of a cloud application (will also discuss in a future blog post).  Academy is another new object, which helps users and admins with pre-built documentation from Oracle.  Look for future blog posts that go into more detail on some of these new features, but for now enjoy trying out the new interface.

Questions? Need help? Feel free to reach out to us at: