In the last few months, Oracle has released a web version of the classic Financial Reporting Studio.  I am going to walk you through the new feature and show you how it compares to the desktop version that so many people have used for the last decade.

This is great for people that want a quicker way to work with reports, or who have had issues installing the reporting client in the past.  Especially since the client has always required admin access to install, it can be a pain to get up and running if you only need to make a quick change.  This is also extremely useful for versioning.  You always have to match the reporting studio version exactly to what is installed on the server, which can be cumbersome if you work with multiple versions or are in the middle of an upgrade.  With the web version, you do not have to worry about the server version.

[button_orange url=”https://ecapitaladvisors.com/cloud-enablement-kit/”]Get A Cloud Readiness Score[/button_orange]
First thing to note is how to get there.  It is right by the install path to the desktop client, and just below the new shortcut to that studio.

This whole setup feels the same as the older desktop versions; mostly the only differences are updated looking buttons.  For instance, the top bar has all the same buttons and functionality, just with a more modern look.

The other similarity I noticed is the properties bar on the right.  Oracle appears to have matched the properties, labeling and positioning with the desktop version.  This is great news for environments that will have people accessing the reports from both studios. 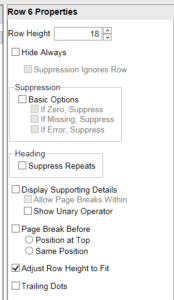 I could only find one functional difference between the web version and the desktop version. The new report outline tool lists all object on the left hand side of the report.  If you want to edit any of the objects, you first need to select that object, allow it to load, and then edit.  This is not very complicated, just takes a few tries before it becomes natural. 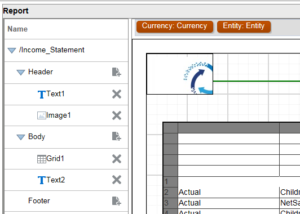 Overall the new web version of Financial Reporting Studio is exactly what you would hope for.  It is the desktop client that can be accessed online, and doesn’t require any additional downloads.  The same functionality exists, it performs reasonably well, and I ran across less issues than I usually do in the desktop version.  One thing to note is the cloud version will only make Planning reports (since PBCS is only a planning product).  I hope to test the other report types once I get access to an on premise version.

Questions? Need help? Feel free to reach out to us at: